Today’s post is really just a few more pages from the family album, as we only managed to get to 1957 the last time (“The Man with the Box Brownie”). Mary makes her first appearance on this page in a photo dated April 1958 (Dad used to take advantage of the odd ray of sunshine to take snaps of us in the house.) 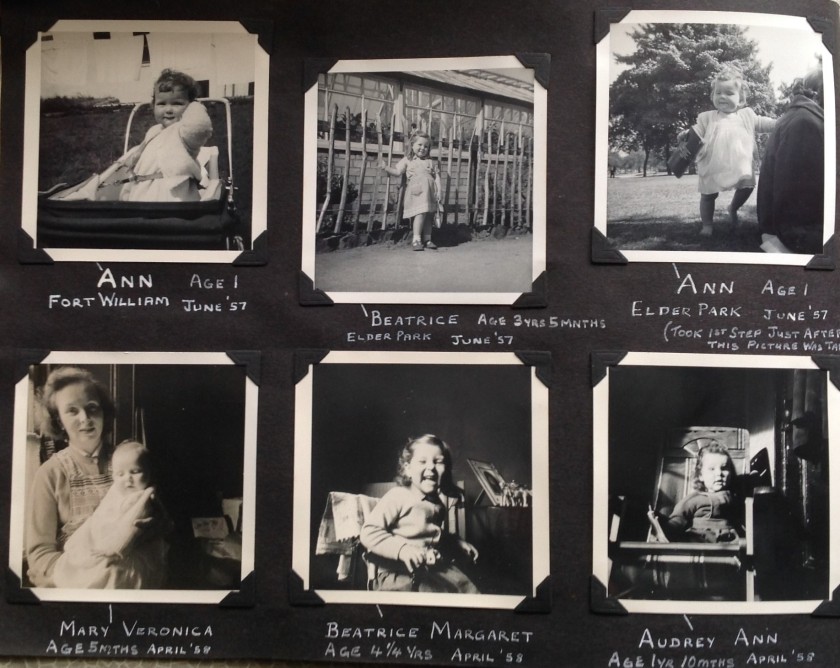 And then in Sept ’58 here’s Mary waving to her fans from the family pram.

And here she coming up for two years old in August ’59. Although, I’m questioning whether this is in fact August. Grace was born in June of that year, so where is she? I think Mum could be pregnant in that lower picture (she’s wearing a pair of her earrings, can you see?) In which case this would be earlier in the summer… 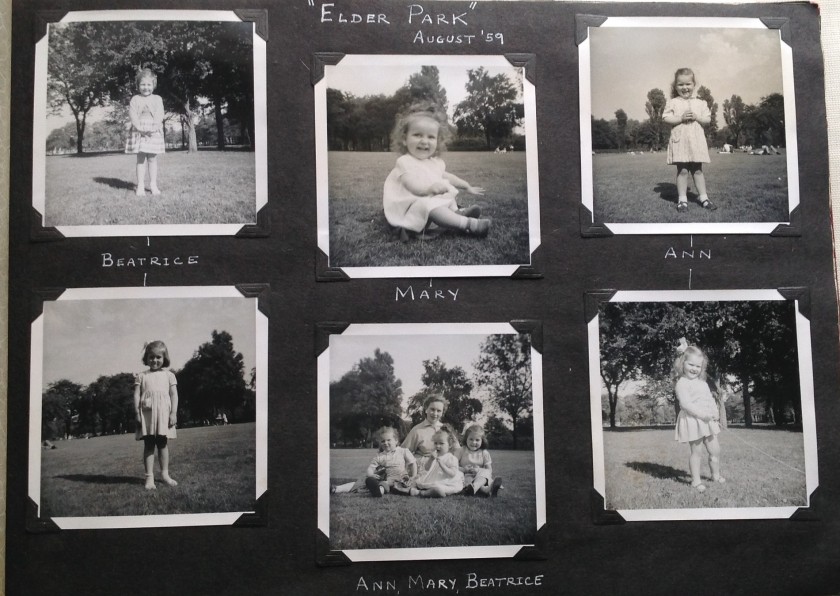 And here’s Grace finally on the next page! Ann has her arm in a sling – she broke it when she fell off the bed! We used to get in trouble for bouncing on our parents’ bed, but it was one of our favourite games. 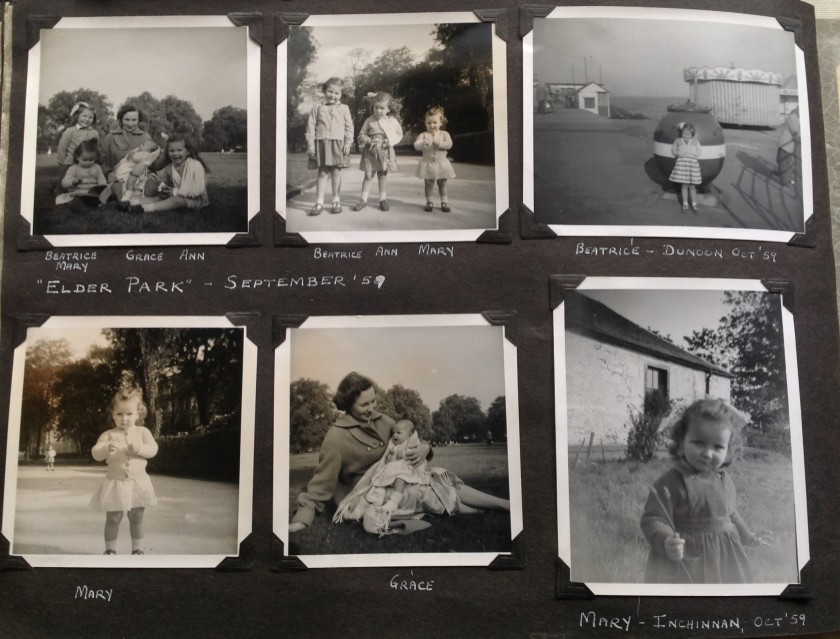 As you can see, we had the odd outing to Inchinnan, where a friend of Mum and Dad’s had a caravan, and down the coast – I think on the train/ferry – to places like Helensburgh and Dunoon. And as well as the Elder Park, they also seemed to like taking us to Bellahouston Park. I have to smile at that second page to see my Dad all formally dressed in his suit and tie just for a trip to the park – different times! 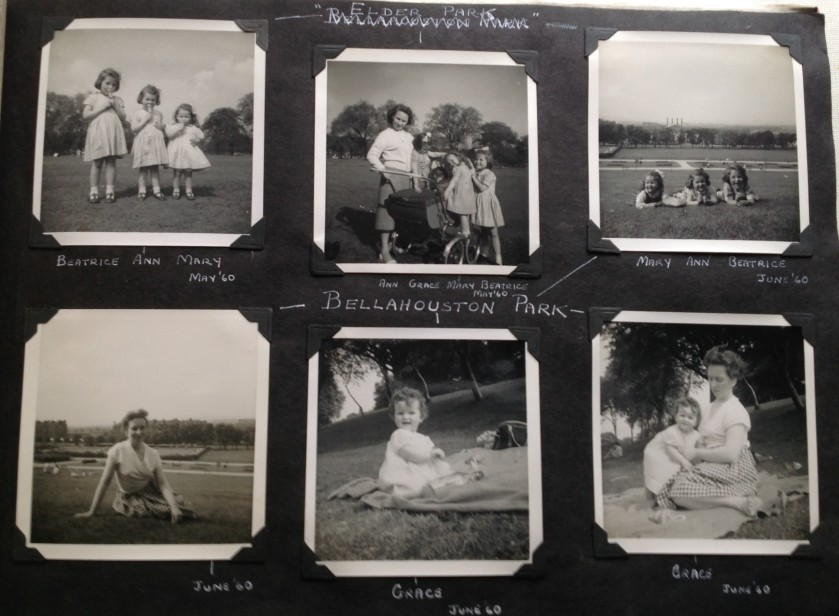 The next page heralds the appearance in 1962 of yet another character that was to become an integral part of our family – the Vauxhall Victor which would serve as our family car for many years to come.  I’m quite surprised to find “Victor” making its appearance quite so early in the story, while we were still living in Rathlin Street, but the evidence is clear.

And of course that wee Vauxhall Victor gave our family freedom. Whenever they could, Mum and Dad would bundle us up in the car and head off up Great Western Road, destination all points north. I can never travel along that road to this day – you can see the mountains in the distance – without getting that feeling of excitement and anticipation that comes as I read the destination boards – Dumbarton, Helensburgh, Loch Lomond, Crianlarich, The Trossachs…. And I am reminded of some words from John’s letter to his mother in 1931 (as written): “The May holiday was very wet and we stayed in ecept in the afternoon we went in the bus for a hurl to Corpach and back.” He was a great one for a wee hurl was our Dad!

And then, the following year, comes the move from Govan to Hillhead. Look back at the post entitled “Sisters, Sisters” if you want to be reminded of the difference that made to the family, and how “Number 8” became our family home for the next fifty years. Here we all are at the beginning of that era enjoying the sun in our very own newly acquired back garden. Jane was born in the January of that year, just before we moved house – unfortunately she was maybe taking a nap during this photoshoot.

I think it must be rather frustrating for my sisters that there are far fewer baby pictures of them than of me. My first couple of years are well documented – as new parents do – whereas they have to make do with the odd shot here and there, and in fact Jane has pointed out that there are NO baby pictures of  her at all. Which is very unfortunate, but perhaps not altogether surprising considering how quickly Eleanor followed on her heels a mere 15 months later in April ’64. Not to mention in that same time period the acquisition of a car, a house, a mortgage, a new neighbourhood, new school for older siblings. Our parent probably barely had time to stop and eat, never mind take photographs! However, they did manage to take this one of baby Eleanor with Mum in the Botanic Gardens, our new local park. After this though, there aren’t so many snaps of us all in the park, as Victor would take us to more exciting destinations where, sure enough, Dad would get out the Box Brownie and line us all up for the family photograph. (Click on each photo to see the captions).

Well, we’ve made it to 1969! It’s kind of funny when you look through old photographs – you know it’s you, but it also seems like somebody else that you struggle to remember. I kind of love the way I look in these photographs, so competent and confident, and sure of my place in the family and in the world. It’s good to be reminded of that, and to appreciate the wonderful close relationships that sustained you growing up – things can get so much more complicated as life unfolds.