John and Ellen (Mum and Dad) reached their Silver Wedding anniversary on the 18th of March 1978. Here they are 25 years earlier on their wedding day, flanked by Dad’s sister Mary and his brother Donald. (See also my blog entry from 10 March). 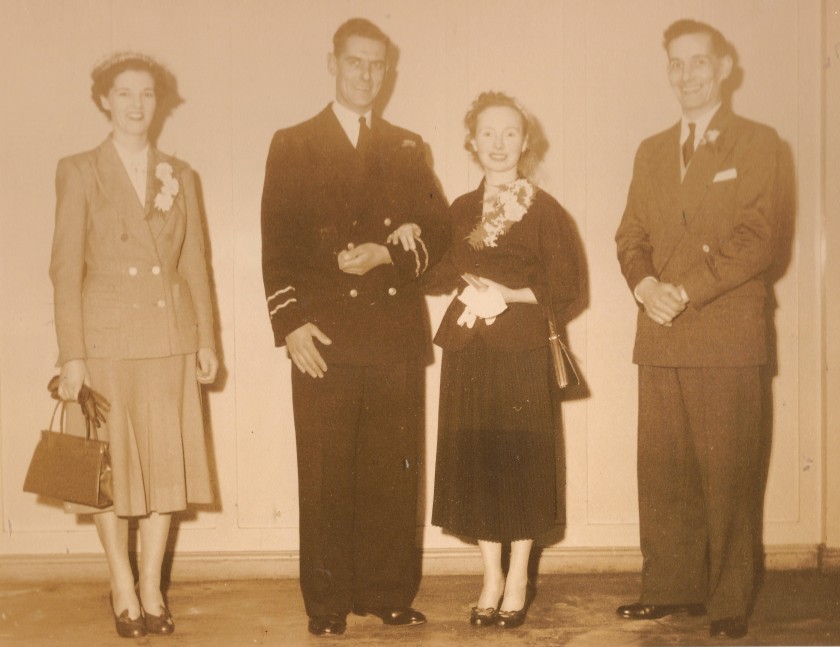 We six sisters spent months plotting and planning a big celebration for them, centering around a Mass where they would renew their marriage vows, but oh, so much more than that! I can’t really remember too much about it all these years later, but Dad was so moved by the whole thing that he wrote it all down on the day on some little scraps of paper, so this – more or less – is the story of their Silver Wedding in his own words… 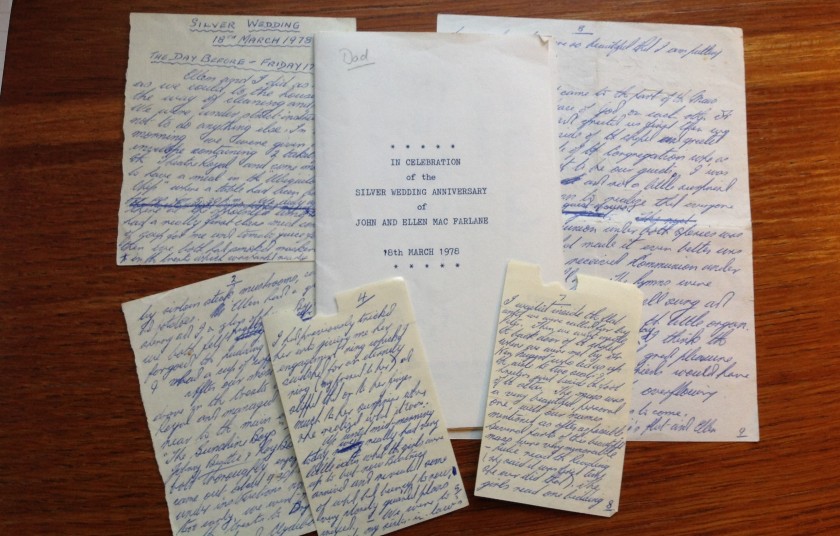 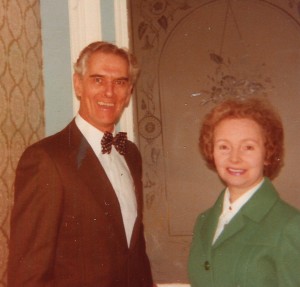 THE DAY BEFORE – FRIDAY 17th MARCH – Ellen and I did as much as we could to the house in the way of cleaning and polishing. We were under strict instructions not to do anything else. In the morning we were given an envelope containing 2 tickets for the Theatre Royal and some money to have a meal in the “Ubiquitous Chip” where a table had been booked for 5.30 pm. We duly arrived at the appointed time, in the Cresta which was parked nearby. We had a really first class meal consisting of soup for me and tomato juice for Ellen, then the both of us had smoked mackerel followed by sirloin steak, mushrooms, carrots and potatoes. Ellen had a glass of sherry and I had a glass of beer. By this time we both felt properly full up so we forgoed the pudding we had planned and had a cup of coffee instead.

A word about the Ubiquitous Chip – until the “Chip” arrived in Byres Road in 1971, fine dining would only have been available in Glasgow in “posh” restaurants with snooty waiters and menus written in French. Now we had a new phenomenon – a restaurant where you were served by friendly student-type waiters, not serving chips despite the name, but offering fine Scottish cuisine using fresh local produce. I remember being taken as a student by a friend, Shuggie, who was desperate for us to try one of the exotic delicacies he had discovered there – fried onion rings!  Anyway, back to Dad…

After our most enjoyable meal we drove in the Cresta to the Theatre Royal and managed to park quite near to the main entrance. (I’m starting to notice how often the family car – always referred to by name – appears in this narrative, like an extra character.) We saw “The Sunshine Boys” – a comedy with Johnny Beattie and Roy Boutcher which we both thoroughly enjoyed. The theatre came out about 9.30 pm and as we were under instructions not to return home too early we went for a leisurely run in the Cresta (see!) to Drymen, returning via Balloch and Clydebank.

Touchingly, I found the tickets and programme from that show carefully preserved along with Dad’s wee notes and the order of service.

No doubt the somewhat obvious ploy of getting Mum and Dad out of the house enabled the six of us to get on with preparations for what was to happen on the day itself. I’m afraid that page 3 of Dad’s account is missing, so we’re going to have to jump to page 4 where we will pick things up from the morning of the 18th.

… I had previously tricked her into giving me her engagement ring which I switched for an eternity ring (my present to her) and slipped that on her finger, much to her surprise when she realised what it was. Up until mid-morning today we really had very little idea what the girls were up to but now Beatrice arrived and revealed some of what had been up to now very closely guarded plans indeed. We were to be at my sister-in-law’s (Mary Jordanhill) house at 12 noon and remain there during the afternoon and then to be at Turnbull Hall shortly before 4 pm.

When we arrived at Mary’s house we had a great surprise when we saw my sister Mary and her daughter Mary were in the house, having arrived from London the day before. This was one of many delightful surprises we were to experience during the rest of the day. Mary gave us a gorgeous lunch and we were really getting into the swing of things now. 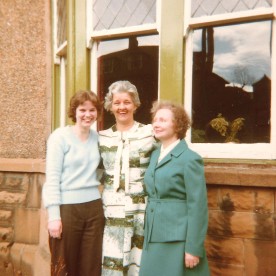 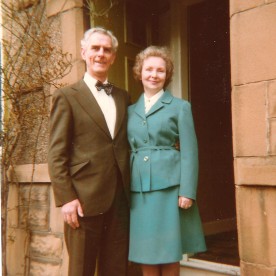 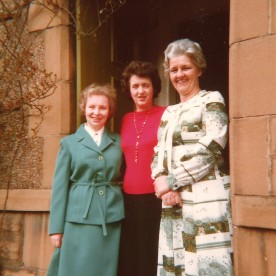 You may notice the absence of our Uncle Donald from these proceeding. Unfortunately Donald and Mary’s marriage had ended a few years before, and Donald was living elsewhere with a new wife and young family.

Shortly before 4 pm we set off for Turnbull Hall and parked the car outside Beatrice’s flat. Ellen and I waited outside until called for. We were met at the back door of the chapel by Father Ken Nugent who led us up the aisle to two seats and kneelers just beside the foot of the altar. The mass was a very beautiful personal one, with our names mentioned as often as possible. Several parts of this beautiful mass were very memorable – Lulie read the Reading (she said it was the first time she ever did that), the girls read one bidding prayer each and they were so beautiful I am putting them down here…  (unfortunately,  Dad didn’t get around to doing that, or the page has been lost)

When it came to the part of the Mass where we wish the peace of God on each other Fr Nugent came down and greeted us first then we each took one side of the chapel and greeted individually the whole of the Congregation who, as it happened, turned out to be our guests. I was absolutely delighted and not a little surprised when I began to realise that everyone there was to be a guest of ours. Receiving Holy Communion under both species was unforgettable and what made it even better was that all the girls received Communion under both kinds as well. The hymns were especially well chosen and all well sung all accompanied by Frances on the little organ. If there had been nothing else that day I think that the joy of this Mass and the great pleasure at seeing so many of our friends would have filled my cup of happiness to overflowing.

It brings tears to my eyes to read just how much this Mass meant to my Dad (and I know to Mum too). They were both devout Catholics all their lives, so it was only fitting that this should be the central focus of their Silver Wedding celebrations. At the time Peter and I lived in a wee basement flat in Turnbull Hall (the Catholic Student Chaplaincy) and Father Ken was our friend as well as our priest, so he was very happy to help us to put together this very special and personal ceremony just for them, including, though Dad doesn’t mention it, them renewing their wedding vows, which they did in a very solemn and heartfelt way.

And of course, that wasn’t the end of the day. I well remember Mum and Dad’s faces as they moved down the church and started to realise just how many people had come from far and wide to celebrate with them, which they did, well into the night, back at “Number 8”.  The next page of Dad’s account is missing, but I’m sure you can imagine the party for yourself – presents galore (silver tray, tea service, carriage clock, etc, etc). Toasts and tears; expressions of astonishment that people had come so far, that no-one had given away the secret; how wonderful it was that John and Nellie had reached this magnificent milestone… And not a single camera between them it seems! The only picture I can show you is this one of Mum and Dad looking tired but happy. 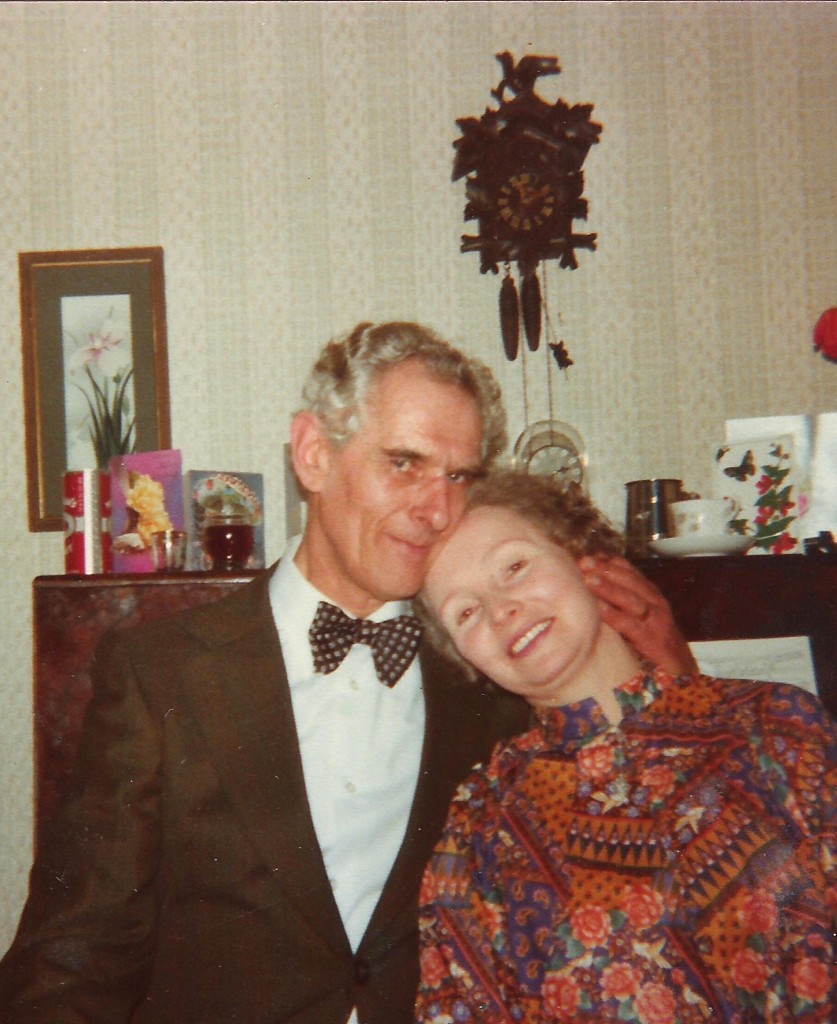 We don’t have the last page of Dad’s account, but what HAS survived is this list he made of all the people who came. Friends and family from Glasgow, the two Mary’s up from London, even a sizeable contingent down from Fort William. I can’t now remember if the absence of anyone from Mum’s family in Ireland was because we neglected to invite them, or if they were unable to come. I’d like to think the latter. I also have an idea that there were messages, or possibly telegrams, read out from some absent friends, but I don’t have any documentary proof of that, so maybe it’s just wishful thinking on my part. 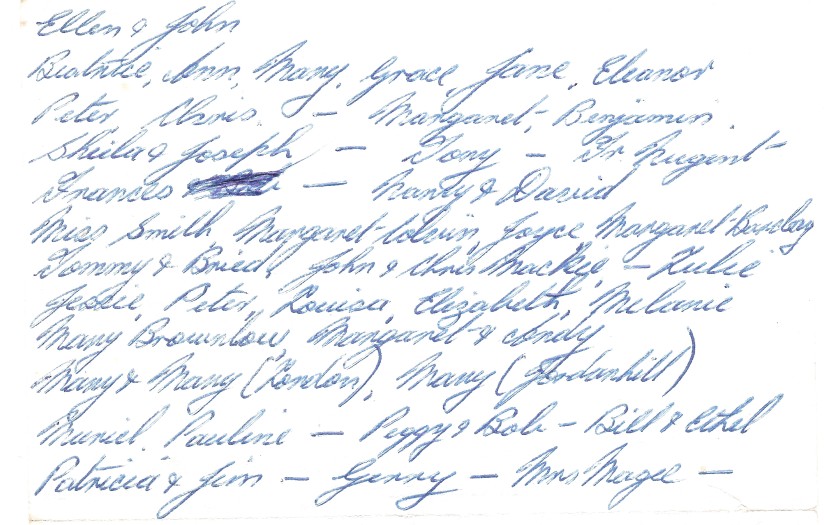 As it turned out, John and Ellen had only three more years together before Dad passed away and Mum began her long widowhood before finally being reunited with her “poor dear John” so many decades later.

It gladdens my heart to know that they so enjoyed their lovely day together, and that it was a true reflection of the love and loyalty they had always shown each other over the years. I’m by no means saying they were perfect and I know that my parents were a product of their times, but I also feel they had a very unique take on life. Perhaps it was because they came to Glasgow as outsiders and had to start from scratch to make a life for themselves here. They were never interested in possessions except in as much as it would enable them to do things with and for their family – a home to live in, a car for freedom, a tent where we could make our own holidays, a gramophone to play music. They had to battle against sometimes being made to feel inferior, they often struggled to make ends meet, but somehow they survived and thrived and no matter how hard things were they seemed never to lose sight of why they were together and to enjoy together the simple things in life they both loved. 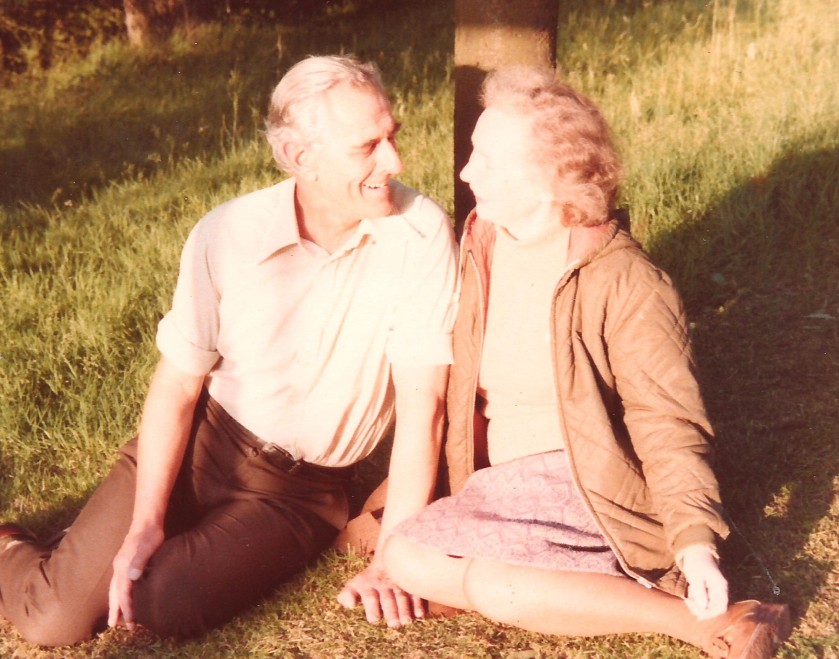