I’ve made quite a few passing references to Spean Bridge in this blog, largely because it was home to cousins of my father John, and George, his father before him – at various times in their lives both John and George were close to their Spean Bridge cousins. Indeed it is to Spean Bridge that we must turn in order to delve further into my family’s roots, so let’s set the scene.

Both Fort William and Spean Bridge are located in the area known as Lochaber, originally an ancient province of Scotland, and seeped in its myths and legends. There’s a possibly mythical association with St Columba who is supposed to have blessed a poor man’s five cows, which caused them to multiply into a herd 100 strong. Another legend tells of a glaistig, an evil goat-woman, who once lived in the area, not to mention Shakespeare’s Banquo, described by the Bard as Thane (Chief) of Lochaber…

The rugged mountains, lochs and valleys of Lochaber formed the backdrop to many of the most dramatic episodes in Scottish history. Perhaps one of the most famous being the Jacobite rising of 1745 when the small hamlet of Glenfinnan saw Bonny Prince Charlie, the ‘Young Pretender’ raise his standard by the shores of Loch Shiel and claim the Scottish and English thrones in the name of his father James Stuart.

It is interesting to note that the first engagement between Government troops and clansmen loyal to Prince Charlie took place at Spean Bridge when a small number of MacDonalds routed a company of government troops on their way from Fort Augustus to Fort William. Dubbed the Highbridge Skirmish, it marked the commencement of hostilities between the two sides. However, despite initial success, the rebellion was doomed to failure and ended ignominiously on the field of Culloden some eight months later.

I’m not going to go any further into the troubled history of conflict between Scotland and England here – just google ‘Jacobite rebellion’ or ‘Highland Clearances’ if you want to know more. You only have to look at the map and see names like Fort William, Fort Augustus and, further north, Fort George to realise that these forts, called after English kings and princes, were built there for the purpose of the subjugation of the troublesome natives. As were many of the spectacular feats of engineering – roads, canals, railway lines, intended initially for military purposes (e.g General Wade’s military roads), but also as an attempt to address the problems of depopulation and open up the Highlands to development.

Of the thousands of visitors who are drawn to the Highlands every year, many come in search of their roots. They are the children of the diaspora, since the Scots, like the Irish, are a people who have dispersed to the four corners of the world, sometimes to escape poverty and famine, but often in a spirit of adventure and enterprise to seek their fortune in distant lands. The Spean Bridge MacFarlanes are no exception – like many Scottish families, they have fetched up in far flung places throughout the globe, including England, South Africa, Canada, the United States, Argentina, Norway, Australia.  However, for the moment I am more interested in those members of the clan who stayed at home. So we’re going to zoom in on the village once again in order to discover more about their story. This is a screen shot from Google.

Anyone heading for the Commando Memorial just a mile or so outside the village will no doubt pass this Spar shop on the way. Perhaps they will even stop to stock up on provisions. It is this very shop, and the adjoining buildings, which have been associated with the MacFarlane family for some 170 years, providing six generations with a home and a living. Though the current encumbents don’t run the shop any more, but lease it out to Spar, they still live in the house. The self same house that my Dad visited in the 1930’s when he would let himself in and play the piano in the parlour. (See blog entry ‘Tribe of Cousins’, 27 May).

In my next post I’ll share with you some fascinating old photographs which track the shop’s development over the years, as well as the changing face of the various proprietors. They were sent me by my cousin Robert (settled in South Africa) and constitute for him memories of his childhood home, which he is drawn back to Scotland to visit every so often. I am looking forward to meeting him one of these years!

To whet your appetite, here’s a view from around 1875, the earliest picture we have. As you can see, the building has undergone almost a complete transformation since then, but look carefully – could that be the very same porch as the one in the modern screenshot? They didn’t sit still these ancestors of mine – as the Highlands developed, so did they… 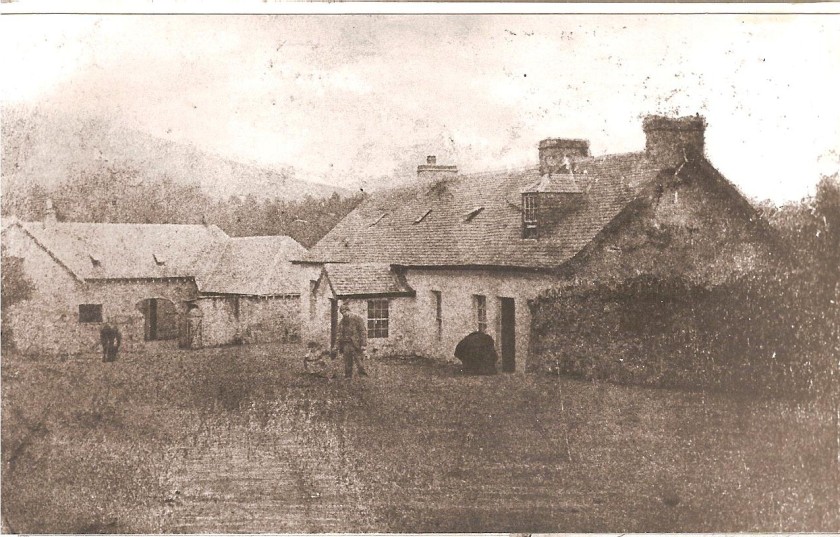 We human beings need to feel a sense of belonging. Being part of a group, knowing how we fit in seems necessary to our well-being, to our very sense of self. I suppose one of the reasons why we want to trace our past is that very need to understand the group, or family, we came from and what has made us into the person we are today. And perhaps to use that comprehension to heal things from our own past which may have been holding us back in some way.

Which sets me thinking about orphans, refugees, the displaced. How much harder must it be for someone who has been forced, or has chosen, to flee from everything and everyone they hold dear, and start again in a new place. To create a new story, find a way of belonging in an alien place. A place that is not always very welcoming.

A case in point – imagine being part of the “Windrush Generation”, invited by the “Mother Country” to leave the Caribbean and come to the UK in order to help with post war reconstruction.  Only to be met by hostility and signs like this one. And NOW, more than half a century later, our contemptible Government is the instigator of new regulations which have questioned whether the Windrush immigrants and their children have a legal right to stay in Britain, to be treated on the NHS, stay in employment, be able to keep their homes. I cannot express just how shamed and disgusted I feel that this is happening to these people in this day and age. All the belated grovelling apologies just don’t seem enough.

Until 1965 (UK Human Rights Act), it was not illegal to put the above notice in your window . It occurs to me that my own Irish mother could have seen signs like that as she went about her business in 1950’s and 60’s Glasgow, though it’s my impression that Glasgow saw less of that kind of racism due to its strong links with Ireland over the years. But still, my Mum, the alien! She who became more Scottish than the Scots, whose love of her adopted land ran strong and deep and true. Here are her own words as she was approaching home after one of her Russia trips.

It was lovely to see our first glimpse of Scotland, dear old Scotland, so green and small! And do you know all our roads are curvy and the walls around our fields, and our houses and farms and hills. Lovely.

In some ways displacement from Ireland to Scotland might not seem such a huge distance to travel – not like someone coming from a faraway land where faces are a different colour, tongues speak a different language and the sights, sounds and smells of everyday life so different as to be almost unrecognisable. It’s no wonder that migrants, whether fleeing from war and oppression or just looking for a better life, tend to gravitate together in expatriate communities. They often struggle in the face of what can be a suspicious and hostile new world.

I find it sad that instead of welcoming the stranger with open arms, so often backs are turned, excluding them and even turning them into scapegoats for the ills of society which have nothing to do with them. Our present British Government tends to pander to these prejudices. And as to the current American President! He seems to have forgotten the wonderful words carved on the Statue of Liberty. 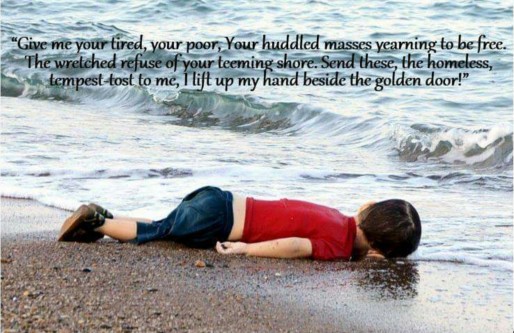 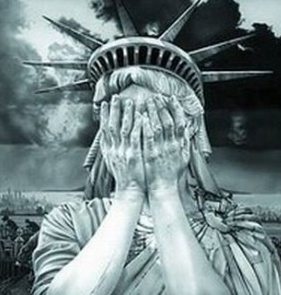 We all belong to one another. The more I explore my family tree, discovering yet further  distant relatives, the more it is brought home to me that families, in fact humans, are really just variations on a familiar theme, sharing the same basic feelings and instincts. I can’t imagine there’s a single person whose heart doesn’t break at the sight of that wretched little body on the shoreline. It helps me to remember that whether we are high born or low born, rich or poor, a rogue or a saint, we are more alike than we are different… 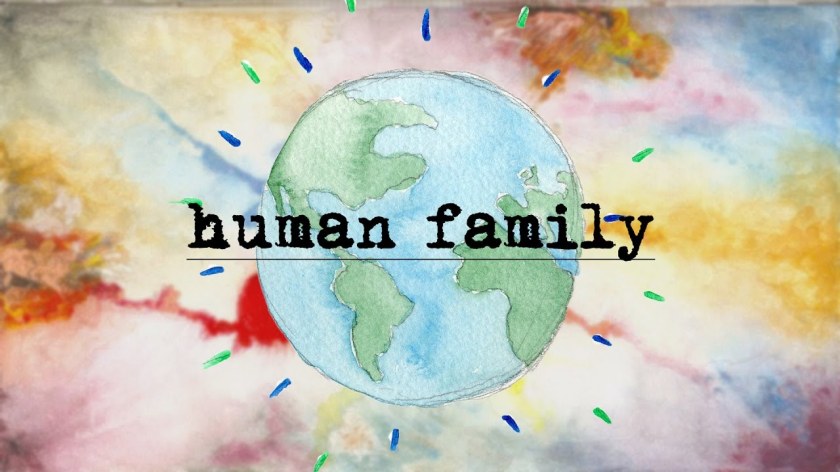 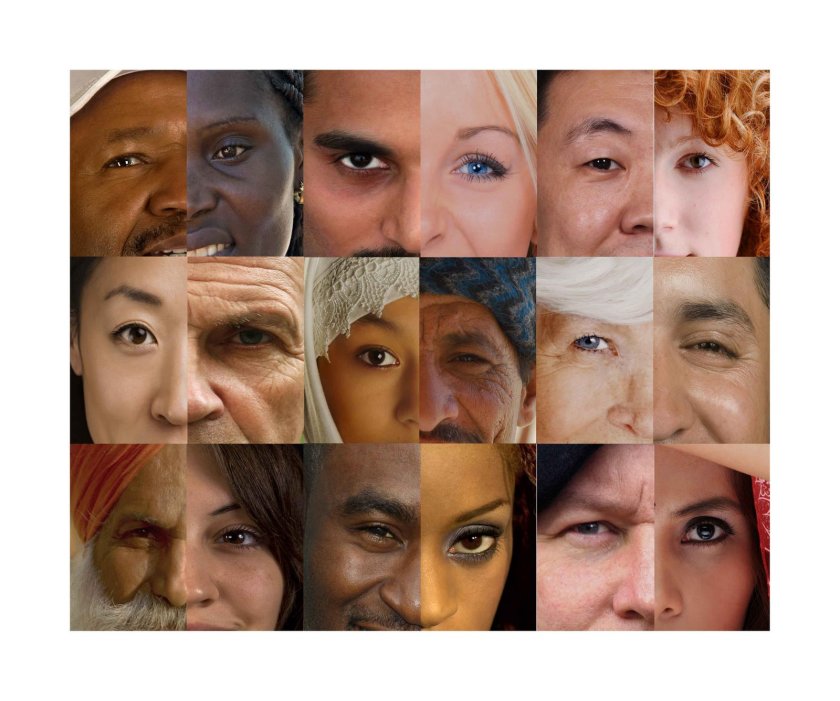